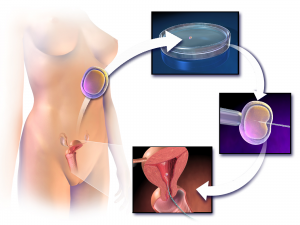 Study shows acupuncture can boost IVF success rate. In 2002, two teams of researchers in Germany and China have found that adding acupuncture to the treatment regimen of women using assisted reproductive techniques to have a child can dramatically improve the woman’s chances of getting pregnant. Their findings, published in the April issue of Fertility and Sterility and widely reported in the popular press, could bring new hope to thousands of couples.

A total of 160 women undergoing either IVF or ICSI were chosen for the study and randomly assigned to a control group or an acupuncture group. The average age of the patient and the cause of infertility were approximately the same for each group; only patients with good quality embryos were included in the study.

Six weeks after the embryo transfers were performed, all of the women were given an ultrasound examination. In the control group, the presence of a fetal sac, the scientists’ criteria for a clinical pregnancy, was found in 21 women (26.3%). In the acupuncture group, the pregnancy rate was “considerably higher” – 34 women (42.5%) were carrying a fetal sac at the time of examination.

In the past few years of practicing acupuncture in conjunction with IVF, I developed a IVF acupuncture protocol to help boost the success rate.